“I began my talk the next day by explaining that in business we are taught to fit in, but that I was starting to think this might not be the right approach. I said out loud that there are differences between men and women both in behavior and in the way their behavior is perceived by others. I admitted that I could see these dynamics playing out in the workforce and that, in order to fix the problems, we needed to be able to talk about gender without people thinking we were crying for help, asking for special treatment, or about to sue.” (page 145) 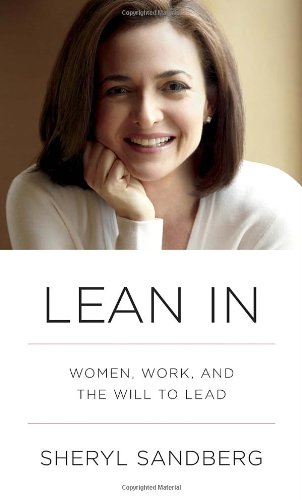 I’d like to start my review of Lean In: Women, Work, and the Will to Lead

with a quote other than the one I have seen everywhere on the internet, and in Sunday School, and on the radio . . . the one that talks about women running half our companies, and men running half our homes. Because, I think it’s important to point out from the beginning that Sheryl Sandberg’s book is not only about feminism and equality. Those are definitely dominant themes in the book, and I will be the first to say that I don’t agree with all of them. However, I will tell you up front and happily that this was a very good and timely book for me. (Don’t ask Jeremy, who has already been subjected to hours of verbal processing of this book.)

Lean In is a book that should be read by men and women alike – homemakers, businesswomen, heads of companies, girls in high school. The point of the book is not that every woman should pursue top-level positions in Fortune 500 companies, but that more women should have the opportunity to pursue those positions and the support they need to get there.

I wrote a post yesterday about the concept of complementarianism, because I didn’t want to spend three quarters of this post explaining my position on men and women, so if you’re interested, check that out first.

So, to move on, I am not subscribing to all of Sandberg’s ideas or ideals about men and women and how we should interact and work together in the corporate world. What I did really like about this book was that it pointed out social norms and stereotypes that women both suffer from and continue to allow to control them. Norms like the fact that successful and aggressive women are automatically expected to be poor mothers, because they cannot be both nurturing and successful. Not only is their family connection called into question, but they are also not liked, by men and women alike. A man, by contrast, who is successful in the workplace is well liked by colleagues and praised for his successes. This was pointed out by a study done in which business students were given identical resumes and asked for their thoughts on the applicant in question. Though the resumes were identical, the instructor had used the name Heidi for one group of students and the name Howard for another. Overwhelmingly, those studying Heidi agreed that she was competent and successful, but they didn’t really want to work with her. Those who studied Howard, on the other hand, had very positive things to say about him and were excited about the prospect of working with him.

Sheryl points out social issues of gender roles like these {and others} and points out ways for women to deal with them and still pursue their dreams and goals in a way that is befitting of women. She doesn’t propose that women ‘man up’ or try to act just like their male superiors. She gives practical solutions for ways to both address the issues of gender discrimination outwardly, by discussing the problems and looking for ways to encourage girls rather than perpetuate the problems. She also talks directly to women and ways that they can move past stereotypes. If we want to succeed in the business world, then we need to take steps. We need to speak up, we need to make decisions, we need to not worry so much about what people think about us, but we should always remember that we are women, and therefore the way we interact with the world is different than the men we work with.

I know that this book has received a lot of heat, but I would say that there are some really helpful and good points made in it. I would definitely recommend it, along with Jeremy’s classic warning: chew the meat, spit out the bones. Of course I am not promoting 100% of what I read in this book, but it was challenging to my thinking, and issues such as this are important to understand and develop your own thoughts on, so I would encourage you to do just that!