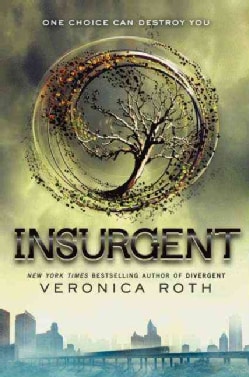 I reviewed the first of this series a couple of weeks ago, and I have to say, I liked #2 much better. It’s still not The Hunger Games, if you ask me, but I definitely got way more intrigued in the second book.

by Veronica Mars picks up just a bit after Divergent ends. The city is in chaos due to the war being waged by citizens under the influence of an Erudite administered simulation serum.

Tris, Tobias, and a handful of others have escaped and made their way to a safety zone in one of the other factions where they spend just a short time recuperating and trying to figure out what there next move is going to be. They can’t just let Erudite continue terrorizing the city with their power plays, but as just a handful of trained and passionate rebels, they aren’t sure exactly how to penetrate the strong grip that Erudite suddenly has on the city.

Insurgent is a fast-paced battle story, but there are also lots of quiet moments and deep questions of morality and how the world is supposed to work. Tobias and Tris go through round after round of wounded trust and doubt. There is danger and intrigue and betrayal, and I’m not going to tell you any more, because you should read it for yourself!

I had mentioned in my previous review that I was uncomfortable with the amount of intimacy between Tris and Tobias for a teen novel. That still exists in Insurgent, though I didn’t feel that it was as forced or inappropriate as I had felt about Divergent. So I was happy about that. I will say that there were moments in the book that I felt there were too many circles, and we were running into the same issues too many times, but most of that was forgiven and forgotten once I got to the last quarter of the book and was really not wanting to put it down.

I do feel like this series will warrant another read in the future when I can slow down and look at some of the philosophy and worldview that is being portrayed through the pages. According to the internet, Veronica Roth is a Christian, which puts a very interesting spin onto the events that occur in the pages. There is very clearly a message being portrayed regarding what it means to be human and to live in society, and whether or not we are one-dimensional beings or beings who are more complex and whose interaction require much more intentionality and thought.

I know that I wasn’t able to delve into all of the philosophy while reading the story as a thriller, but there are still interesting questions floating around my head, and Roth does a good job of leaving you a bit in the dark as to her own thoughts on the issues as you race through an adrenaline laced story.

So, I offer this one to you with the same (though slightly higher) recommendation as I did the first, and I am off to continue reading Allegiant, because right now I really need to know what happens next!